Agreed. 120 litres of gas doesn't take you far in a jet. Initial cost for a 200lb thrust model engine is pretty steep. Start playing with bigger engines and you'll squeak when you see the numbers.

Going to be interesting watching folks used to instantaneous power get used to spool up on a jet, as well as the power-at-idle performance of something that clean.

Definitely a fun machine though. Nice toy to blow out the cobwebs.
I am Dyslexic of Borg. Prepare to have your arse laminated.
Top

3-5 years ago this jet as well as electric flight where all Stephen Spielberg movie threads. Today they are reality. I have no doubt that Fadec Jets will soon be gracing the skies and they will come from someone's back yard. Will guys get hurt trying, YIP possibly so as did Wilbur and Orville. This is that kinda pioneering. I LUV IT....

Cheap, simple and no back seater.... 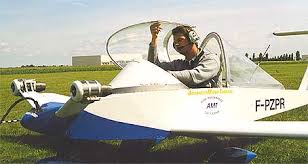 Some are pioneers, and cheers to them

... I personally am thankful for pioneers. The same sideline comments must have been said about the first homebuilds... but now there are more than 600 different homebuild kits. I agree with George the future of aviation will change and with new Jet engines becoming more available there will be more kit builds like the Sub Sonex emerging. I'm EXCITED about the the Sub-Sonex and future aircraft like this one!

This is what I do, to pay for my flying. Check out http://bit.ly/Avcom
Top

Here are some miscullaneos pics I have found of the Sub-Sonex while browsing the net recently. 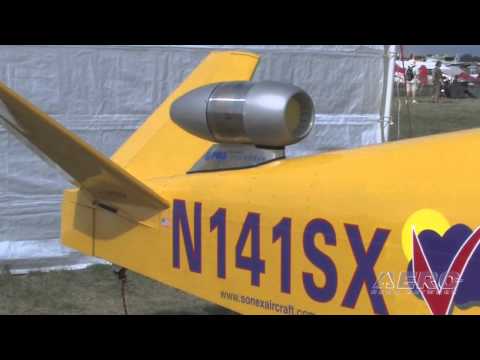 This is what I do, to pay for my flying. Check out http://bit.ly/Avcom
Top

ITS OFFICIAL!! Its taken to the air on its maiden flight!

Sonex Aircraft, LLC is excited to announce that the SubSonex jet aircraft prototype, JSX-1, made its maiden flight today, August 10, 2011 at Wittman Regional Airport in Oshkosh, WI. The SubSonex was piloted by air show performer and owner of Desert Aerospace LLC, Bob Carlton. The flight lasted approximately 14 minutes and focused on exploring the low-end of the aircraft's speed envelope, including stalls, and a low approach in the landing configuration.

"It’s an exciting day for Sonex," said SubSonex designer and Sonex Aircraft, LLC President John Monnett. "We have a test flight plan to expand the envelope of the aircraft, and we'll see where the project takes us from here."

"It was great - flies like an airplane,” Carlton said after the flight. “The faster I went, the better it felt." Carlton was selected to fly the aircraft based on his vast experience pioneering light jet aircraft. Bob Carlton is best known for his air show performances with the Super Salto jet sailplane, and is the developer of the Bonus Jet two-seat glider. The engines used on Carlton's aircraft are the same as that used on the SubSonex: The PBS TJ-100.

More information about the SubSonex jet aircraft can be found on the Sonex Aircraft Hornets' Nest Research and Development web site at: http://www.sonexaircraft.com/research/subsonex.html WATCH THE VIDEO HERE!!
This is what I do, to pay for my flying. Check out http://bit.ly/Avcom
Top


The SubSonex touches-down on Wittman Regional Airport's Runway 27 with Bob Carlton at the controls for the aircraft's second flight on August 11, 2011.

John Monnett (left) and Bob Carlton (right) pose for a celebratory group portrait with SubSonex JSX-1.
The Hornets' Nest R&D team is extremely pleased with the progress of the SubSonex Jet aircraft since first flight on August 10, 2011. Air show performer and owner of Desert Aerospace LLC Bob Carlton conducted the August 10th first flight, and remained in Oshkosh until August 14th, conducting several SubSonex flights before leaving for his next air show performance with the Super Salto Jet Sailplane. Bob's flights continued to expand the envelope of the SubSonex as his comfort level with the ship increased. Flights explored low and high ends of the speed range. Speeds well-over 200 mph TAS were recorded, and Bob explored stalls, control authority, unusual attitudes and some basic, light aerobatics. Some of the highlights of Bob's flights can be seen in the videos below.

On August 25, 2011, John Monnett made his first flight in the aircraft. Several more flights have been piloted by John and his comfort level and confidence in the aircraft has grown tremendously. Hornets' Nest R&D employee Drew Waterworth also flew the SubSonex on August 30th. John and Drew's flights are also shown in the video footage available below. Although built to be a neutrally-stable, fun and responsive aircraft, like all Sonex Aircraft, the SubSonex is remarkably smooth and steady, allowing Bob, John and Drew to often fly "hands-off" for brief periods. Fuel economy of the SubSonex jet aircraft has also proven to be better than expected.

Sonex Aircraft would like to extend tremendous thanks to Bob Carlton for all of his advice, expertise, and skilled test flying. Additional thanks goes to PBS, manufacturer of the TJ-100 engine, which has performed flawlessly on the SubSonex Jet. The TJ-100 has proven smooth, powerful, reliable, and incredibly easy to install and operate with PBS's "plug & play" systems. More information about the TJ-100 can be found in our November 25, 2009 and December 23, 2009 SubSonex progress updates. Thanks also goes to MGL Avionics for their sponsorship of the instrumentation, including custom configuration of the MGL Flight II instrument to suit the SubSonex's unique needs. Our thanks also goes to Wicks Aircraft Supply for providing a set of AveoFlash PowerBurst lights for the aircraft.

Development on the SubSonex continues, as the Hornets' Nest R&D team has recently completed installation of a retractable nose gear on the aircraft, intended to improve yaw stability in cruise and increase cruise speeds. A design study has also begun on the #2 prototype configuration of the SubSonex, which will allow for a larger cockpit, enhance the streamlining of the nose of the aircraft, and may feature a redesigned wing removal system for easier transport and storage.


Full story, videos and pics here: http://www.sonexaircraft.com/research/u ... 00711.html
This is what I do, to pay for my flying. Check out http://bit.ly/Avcom
Top

With my recent visit to the Sonex premises in Oshkosh this October, I had the privilege to get a glimpse of the progress on the second and improved SubSonex. This one is fitted with retractable gear and a ballistic parachute. It surely is going to be a cool looking addition to the Sonex range of aircraft.
Top

With my recent visit to the Sonex premises in Oshkosh this October, I had the privilege to get a glimpse of the progress on the second and improved SubSonex. This one is fitted with retractable gear and a ballistic parachute. It surely is going to be a cool looking addition to the Sonex range of aircraft.

Did you manage to snap any pics?

- Also did you have a chance to chat to any of the Sonex staff about when they think it may become an official product offering of theirs?
This is what I do, to pay for my flying. Check out http://bit.ly/Avcom
Top

Sorry for the delay in uploading these photos. Imagine four of these in an aerobatic display team. It will probably be the least expensive jet team to operate.

As stated before, it will have retractable gear and will be equipped with a ballistic parachute.

Enjoy
You do not have the required permissions to view the files attached to this post.
Top

Sonex Aircraft, LLC will be unveiling a special opportunity for pilots to become SubSonex Personal Jet owners at EAA AirVenture Oshkosh 2013! Potential customers will have their first opportunity to get in- line for SubSonex production slots, with full details to be announced at a briefing for customers and members of the media on Sunday July 28, 2013 during the Sonex Aircraft Homecoming and Open House Fly-In event, beginning at 10am at the Sonex Aircraft factory headquarters facility on the East side of Wittman Regional Airport. Additionally, there will be a follow-up press briefing in the Sonex Aircraft display booth at AirVenture on Monday July 29th at 10am, re-capping details of the SubSonex jet program, and covering other major news and announcements from Sonex Aircraft, LLC. Sonex Aircraft will begin accepting customer bookings for the SubSonex Jet immediately following Sunday’s briefing.

"If you’ve ever dreamed of owning a personal jet, now is the time!" remarks Sonex Aircraft Founder & President, and SubSonex jet designer John Monnett. "The SubSonex extends the Sonex Aircraft 'Reality Check' philosophy to become the first truly practical and affordable personal jet for recreational flying. When you are flying a SubSonex, the $100 hamburger never tasted so good!"

JSX-1, the SubSonex proof-of-concept prototype will once again be featured in flight demonstrations during the showcase presentation at AirVenture Oshkosh 2013. The SubSonex Personal Jet concept was first unveiled at AirVenture in 2009. After successful pairing with the PBS TJ-100 engine, the SubSonex JSX-1 prototype achieved first flight in August 2011 and completed a successful flight test program in 2012. Second-generation JSX-2 prototypes are currently under construction to serve as “conforming” prototypes representing the final SubSonex Personal Jet product. JSX-2 will incorporate many new features and enhancements, including fully retractable gear with a steerable nose wheel, a full-airplane ballistic parachute system, larger cockpit, increased fuel capacity and more. More SubSonex details, including flight videos and an informative webinar presentation, can be found on the Sonex web site at: www.SonexAircraft.com/subsonex

Sonex Aircraft, LLC is a leader in the experimental kit aircraft industry, providing a series of Sport Pilot eligible kit aircraft along with the AeroConversions line of products which include the AeroVee engine, AeroInjector and ancillary aviation products. Sonex Aircraft’s Sonex, Waiex, and Onex sport planes, the Xenos sport motorglider, and now the SubSonex Personal Jet, offer outstanding performance in an easy to build, easy to fly kit package that can be purchased and completed with full technical support at an unrivaled price. Sonex and AeroConversions continue to invest heavily in developing new products. Our team is committed to providing simple, elegant and low-cost solutions for sport flying. Simply put, Sonex Aircraft and AeroConversions products provide the Best Performance Per Dollar. Check us out at www.SonexAircraft.com and www.AeroConversions.com This is what I do, to pay for my flying. Check out http://bit.ly/Avcom
Top
26 posts