The world’s rich and famous have flocked to a posh Italian resort to talk about saving Mother Earth — but they sure are punishing her in the process.
The billionaire creators of Google have invited a who’s who of A-list names— including former President Barack Obama, Prince Harry, Leonardo DiCaprio and Katy Perry — to the Sicilian seaside for a mega-party they’ve dubbed Google Camp.
The three-day event will focus on fighting climate change — though it’s unknown how much time the attendees will spend discussing their own effect on the environment, such as the scores of private jets they arrived in and the mega yachts many have been staying on.
“Everything is about global warming, that is the major topic this year,” a source told The Post.
Their three-day summer camp will cost the tech giant some $20 million, sources said.
Many of the guests, including Obama and DiCaprio — who has his own climate change foundation — have described global warming as the biggest threat to future generations.
But according to Italian press reports, the attendees were expected to show up in 114 private jets, and 40 had arrived by Sunday.
The Post crunched the numbers and found that 114 flights from Los Angeles to Palermo, Italy, where Camp guests landed, would spew an estimated 100,000 kilograms of CO2 into the air.
“Google Camp is meant to be a place where influential people get together to discuss how to make the world better,” one regular attendee told The Post.
“There will likely be discussions about online privacy, politics, human rights, and of course, the environment, which makes it highly ironic that this event requires 114 private jets to happen,” they said.
Attendees pay for their own travel to Sicily, but then Google foots the bill for everything at the opulent Verdura Resort, which reportedly features two golf courses and where rooms start at $903 a night.
Sources tell The Post that guests were personally invited by Google founders Larry Page and Sergey Brin.
Stars there also include Harry Styles, Orlando Bloom, Diane von Furstenberg and Barry Diller, who arrived on their enormous $200 million yacht Eos, which has both sails and two 2,300-horsepower diesel engines.
Billionaire Dreamworks founder David Geffen, meanwhile, gave Perry and Bloom a ride on his $400 million yacht, Rising Sun.
Also on hand for the environmental gabfest was the megayacht Andromeda, a 351-foot behemoth owned by a New Zealand billionaire and which features its own helipad.
Many of the attendees were seen in photos tooling around the island in high-speed sports vehicles, including Perry, who has made videos for UNICEF about climate change and was seen in a Maserati SUV that gets about 15 mpg city.
Stella McCartney, Bradley Cooper, Nick Jonas and Priyanka Chopra plus Gayle King will also be on hand. Even Mark Zuckerberg of Google’s rival, Facebook, was invited, according to local reports.
Guests dine among ancient temples and are treated to performances by the likes of Sting, Elton John and Coldplay’s Chris Martin, before retiring to their suites at the Verdura Resort.
The tech company goes to extreme measures to keep its camp a secret — all hotel staff and security have to sign non-disclosure agreements, a source told the Daily Mail in 2018.
Top

Climate change is beeg business.....now that apartheid is gone and aids is no longer interesting. You would not hear any of them mention a real problem....population growth.....but hay let them spend their energy on climate change.....its keeps them occupied and feeling important....in the mean time we can keep on hunting.

Politics attracts crooks and lawyers,most of the time its the same person.
Top

Sounds more like a publicity stunt.
Or last ditch attempt at a Big Nothing Hamburger.

Today the weather is nice and sunny.
Tomorrow the climate will change and it will be cooler with rain with a few spots of mild wind.

I also see that as SA and the world's biggest problem, why do you think nobody dares to touch that subject?

Whirly.
Every dog needs a home and every home needs a dog (or two or three).
Top

Marius, I also see that as SA and the world's biggest problem, why do you think nobody dares to touch that subject?

Provincial Governments provide free contraception to the public, anywhere in the country for specifically that reason. Organisation like mine (AVSSA) is constantly marketing the concept around "Small families are better off", with a great response from mainly Blacks and mainly males wanting vasectomies (Whites usually have better access to medical information through GP's and medical aids) throughout SA.

Many tens of thousands are spent monthly promoting the concept in magazines, over Facebook etc etc. With recent promises of additional donations we're working on radio ads. Both the Gauteng and Western Cape depts of Health (other provinces are less organised

) are working with us as the interface with the public, especially the less sophisticated. Affinity Health Medical Aid (who don't pay for sterilizations) have recently contacted us to help out with their clients that want sterilizations. We consult to two government Social Welfare agencies on the subject, more especially with regard to the law applicable to sterilizing mentally-challenged individuals.

I commend your efforts and those that do try. I am talking about World Leaders, including our own President(s). I can't imagine Zuma would ever have spoken about it.

The message needs to come from the top down.

These users liked the author Whirly for the post:
Davidc

Whirly wrote: ↑
Thu Aug 01, 2019 12:00 pm
jack, Stop making assumptions. I commend your efforts and those that do try. I am talking about World Leaders, including our own President(s). I can't imagine Zuma would ever have spoken about it.

The message needs to come from the top down. Whirly.

Sheesh! Who is making assumptions here? It's National Govt (the top tier of govt) policy as reflected downwards to the Provincial (second tier) Govts. And even the larger munis (third tier) get in the act although they aren't involved in the permanent stuff (sterilizations) but rather providing LARCS, IUD's etc.

The only thing I am anti here is unabated population growth. I have seen no summits to address this issue that holds huge risks for the world as we know it if nothing is said or done. When did any of our or any African Presidents speak openly about this? When did any American, English, French, Italian, Australian, Indian President speak openly about this or called a summit? They don't think it is pc to do so.

Our Presidents will rather push the grants available to mothers in order to gain more votes than speak out against them having more children.

I have had my say.

Okay, I see an element of miscommunication here. You seem to be saying that because you personally haven't seen it, it doesn't exist. If so then you're also basing your thinking on an assumption.

Well, here's the thing, you're not our target market. We don't advertise and advocate for smaller families where you and Marius will see it. For just one example we run adverts in "Man" magazine (circulation 80,000 per month), which targets a specific demographic. We run very targeted ads on Facebook that lead to thousands of click-throughs to our website every month. Less than 10% of those are White. Soon we'll be running ads on specific radio stations. By all practical measures those radio station don't have any white listeners.

Now I'll make an assumption. I really don't think that either you or Marius will see or hear any of those ads. That doesn't mean that they aren't there. It just means that you're not the targeted demographic.

The fact that, nationally, millions of Rands are spent on providing free sterilization services for our referrals means that there's political will behind this. Just because you don't personally see it doesn't mean it doesn't exist. Hell, there's even been talk of a modified Chinese one-child policy, although admittedly it didn't get very far.

Seriously, just because you personally don't know about something doesn't mean it doesn't exist.

It seems to me that when someone can't stand hearing good news stories about SA they just stop listening. I hope that doesn't apply to you.
Jack Welles (thriller_author pen name)
https://www.amazon.com/Jack-Welles/e/B073VJQTTX
Eddie Haynes-Smart
Textbook - "The Lore of Negotiation"
http://www.loreofnegotiation.com
Top

You are right, it does not apply to me. I did commend you about your organization's efforts, it is good news and I am all for it. The radio station ads should have a greater effect as it would hopefully reach the rural areas.

I get back to what I am on about, I want to see top level (Presidents of all countries around the World) talks about population growth and how bad it is for the world, a country and the people. How it impacts on food security, the environment, personal finances, unemployment etc. Our ex President is a shining example of how it should not be done!

This message should be repeated day after day by our top state officials, yet I am still to hear one do so.

The joke about SA that states it is a place where you are handed a condom for free and then get paid R450 a month for not using it, is actually sadder than funny.

These users liked the author Whirly for the post:
Marius Schrenk

) when would it become as important as "climate change" ? How much MONEY is spend on it vs climate change ? Which one causes the other? What is the plan of China and India....where are they going to find the resources and space to feed and expand ? (Effrica is the only "under utilised" area in the world

) Congratulations with the affords Eddy. But please tell us what is the age of the men and woman who are voluntarily being snipped.? Our population is encouraged to breed early (in the lack of work opportunities caused by our anc govmint's management of the economy) Would you say it is successful in curbing our population growth ? Care to substantiate ?
Last edited by Marius Schrenk on Fri Aug 02, 2019 11:58 am, edited 1 time in total.
Politics attracts crooks and lawyers,most of the time its the same person.
Top

This argument is ludicrous at best, this entire thread is Hypocricy in itself !

How much money is being spent on climate change to prevent it ????

The Question that should be asked is How much MONEY is being Spent on Promoting and Encouraging Climate Change ! ! ! ! ! !

Now let me tell you if a buffoon high up in a tree put 1 and 1 together he will realize that BIG OIL Spending in just a few months, DWARFS climate change spending of it's entire existence ! ! ! !

This thread is all about Deniers trying to "feel good" trying to find some sort of twisted justification for FOSSIL FUELS Destroying the earth, spending an uncomprehending amount aggressively every darn day in creating infrastructure that Creates and Encourages the Destruction of our planet which DIRECTLY affects the earth's population ! ! !

And they dare, yes they DARE to come and try blame it squarely on the few peanuts climate change prevention is costing compared to FOSSIL FUEL spending. REALLY ????!!!

What an Absolute Joke this comparison is ! ! ! !

These users liked the author nicofly for the post (total 3):
zander • viki • kudu177

I also see that as SA and the world's biggest problem, why do you think nobody dares to touch that subject?

Conspiracy Theory is I believe what you're describing. 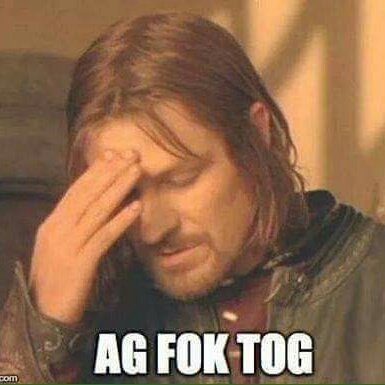 These users liked the author snoopy for the post:
Fransw